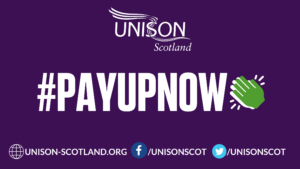 UNISON, Scotland’s largest health union, announced today (Tuesday) that it is calling off its NHS pay ballot following a Scottish government announcement of a £500 pro rata payment for all health workers.

The announcement by Scotland’s first minister came yesterday – on the eve of UNISON Scotland’s ballot – and is a victory for the union after months of pressure on the Scottish government. UNISON, the union for health workers, was the only union calling for NHS workers to receive a payment this financial year.

Willie Duffy, UNISON head of health, said: “We welcome this move by the first minister on the eve of our NHS pay ballot to acknowledge the outstanding efforts of our health workers. However, it’s important our NHS workers are acknowledged for the vital work they do each and every day, not just during this pandemic.

“Our dedicated NHS staff have suffered a real-terms pay cut over the last decade and, while this is a move in the right direction, we will now be focussing our efforts on ensuring a significant pay rise for our NHS workers in the forthcoming Agenda for Change pay talks.”

“Industrial action was always a last resort for our members and this announcement shows the power of being in a union and what can be achieved as the result of a strong and powerful campaign.

“These are just ordinary people thrust into an extraordinary situation who have gone above and beyond to look after us during this unprecedented crisis. UNISON will continue to work with the Scottish government to ensure NHS staff receive this payment as quickly as possible.”