Public services union UNISON has called for action from the Scottish Government to “end the aggro” faced by council and NHS workers. 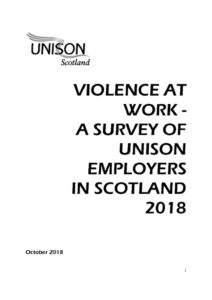 UNISON’s annual Violence at Work survey for 2018 published at the union’s Health and Safety seminar in Stirling today (Friday 19 October) reveals figures for assaults on public service workers running at more than 40,000 for the third successive year.

The figures are double the number reported in UNISON’s first survey of violence on public workers in 2006.

Scott Donohoe, UNISON Health and Safety committee chair, told the conference:
“The massive scale of violence against public service workers – and those in the community and voluntary sector – has been at least partially revealed, with more than 40,000 reported assaults each year for the last three years.”

Scott Donohoe said:
“All employers engaged in delivering public services – whether in local government, health or the community and voluntary sector – should put the guidelines on violence in the workplace produced by the Scottish Centre for Healthy Working Lives fully into practice.

“Community and voluntary sector employers should sign up to the UNISON Violence at Work Charter which aims to support staff who often face violence when providing essential and undervalued caring services.

“We support the extension of legislation covering violence at work to cover all workers engaged in delivering public services – and not just the emergency services. The Scottish Government must move to address this issue.

“We now need action by employers and stronger legislation, regulation and oversight by government to end the aggro. It really isn’t ‘part of the job’.”

The Violence at Work Survey 2018 is available to download on the UNISON Scotland website Health and Safety page
https://unison-scotland.org/health-and-safety/

and at this link
https://unison-scotland.org/wp-content/uploads/UNISONScotlandViolenceAtWorkSurvey_October2018.pdf